Award Winning and fan favorite author, Lizzy Ford, introduces us to a new time travel romance, with WEST , which Outlander fans are sure to love.

If you could change history, would you? WEST is the first installment in a series of standalone novels in the History Interrupted series featuring four women sent back to different time periods to modify historical events. Fans of Diana Gabaldon’s OUTLANDER series will cherish this new series from Bestselling Author Lizzy Ford! Look for EAST, NORTH, AND SOUTH in 2015!

If you could change history, would you?

College graduate Josephine “Josie” Jackson answers ‘yes’ to the question on a survey while visiting an Old West tourist trap. The next morning, she wakes up in Indian Territory in the 1840s, where she’s given a mission to complete before she can return to her time: to reset history by finding and stopping the man responsible for a horrific massacre.

It seems easy enough, until she discovers that three other women have been sent back to the same time period. When Josie uncovers what happened to them, she realizes the chances of her getting out of the past alive are not good.

To survive, she’ll have to trust the very man she’s there to stop, someone who has every reason to distrust her and only one reason to help her – to prove he’s not the monster she claims he’ll become.

Gasping for air, my eyes flew open, and I flung my arms wide, too fevered to touch my own skin. Cold rain poured from the skies, shocking me at first. Lightning tore through the night, brilliant and bright, before it vanished and just as quickly plunged me once more into darkness.

The world smelled funny, like the area in Tombstone where a man had been super heating and blowing glass by hand. Raindrops pelted my face. The surface beneath me was hard, cool, and smelled of dirt. I was definitely not in bed, and the sensations were too real for me not to be awake. I was on my back, gazing up at a night sky. It took a moment for the fast moving clouds to take shape beyond the sunspots left over from the brilliant light.

Disoriented, I pushed myself up and looked around. I lay in the bottom of a steaming crater, right at its center. At first I thought I was surrounded by water, until I recognized the glassy, green rock.

“Moldavite,” I recited. “Occurs when dirt and dust are thrown into the atmosphere after a meteorite hits the earth.”

Moldavite was rare – and sold for a huge price. If I took some back to my aunt, I knew her jeweler could make me something from it and I could sell the rest to pay down my student loans. A thrill went through me at the discovery and I stretched towards the nearest pile. It was still soft. The weird sensation of malleable glass made me withdraw. Wiping my hand self-consciously on my wet yoga pants, I took a second look around.

How did I get to the center of a crater? Beneath me was earth, and surrounding me, moldavite. As if I had been there when the meteorite struck. As if I were the meteorite. I touched the edge of a thick chunk of moldavite near one foot. It was still soft enough for me to push an indent into but cooling rapidly. No longer super heated, it had not yet frozen into its permanent shape yet, either. This shit is worth a fortune. And there was a ton of it. If I weren’t somewhere I shouldn’t have been, I would have been calculating how to transport the rare rocks to the hotel before someone else found them.

More than the chilly rain caused the shudder that ran down my spine. Aside from feeling fevered, I was in the pajamas I normally went to sleep in. I seemed healthy or at least, uninjured.

Beyond the moldavite and patch of dirt were natural, rock-dirt walls about six feet tall topped by swaying grasses battered by the winds of the storm.

Had a meteorite hit Tombstone and flung me out of harm’s way?

Confused, I shifted to my knees. I felt … weak. As if my muscles were having difficulty remembering how to walk.

That makes no sense! Frustrated, I climbed to my feet. One pocket of my pajamas was heavy, and I reached in to see why. My cell phone was there. Satisfied I could call for help, once I was out of the crater, I ventured onto the moldavite. My feet sank into the soft glass, and I grimaced. Wobbling, I caught myself twice as I made my way to the edge of the meteor pit. Rain quickly filled my footsteps, leaving behind an eerie trail. I made it up the slope and over the edge of the crater before pausing at my second obstacle: the dirt wall that was my height.

Fevered and tired with the mild throb of an alcohol-headache, I leaned against the earthen wall standing between the prairies and me. It was much cooler than I expected, and I pressed my forehead to a flat stone for a moment. The rain was cold, and it felt good against my burning skin.

How did I survive being flung out of the city into the grasslands? I wasn’t hurt that I could tell. The last thing I really remember was staggering through town with Carter. Had he been thrown out of the town, too? What if he was hurt? What if my aunt and uncle were?

Someone’s hand stuck out over the edge of the crater. I blinked, uncertain if I was seeing things or not. It was a strong hand, with a wide palm and long fingers. Definitely a man’s hand by its size. What looked like a thick bone and leather bracelet was around his wrist.

I had been talking to Carter and then … 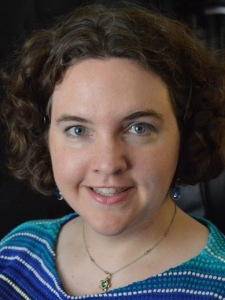 About Lizzy Ford:
Lizzy Ford is the author of over thirty books written for young adult and adult romance readers, to include the internationally bestselling “Rhyn Trilogy,” “Witchling Series” and the “War of Gods” series. Lizzy has focused on keeping her readers happy by producing brilliant, gritty romances that remind people why true love is a trial worth enduring. Lizzy’s books can be found on every major ereader library, to include: Amazon, Barnes and Noble, iBooks, Kobo, Sony and Smashwords. She lives in southern Arizona with her husband, three dogs and a cat.

I am a wife, mother, lover of God, my family, and reading. I find great joy in being with my family and being able to read a good book. View all posts by ashleyf29