Welcome to my blog and this very special first look at Skylar Dorset’s new Y/A fantasy novel The Girl Who Never Was!

The Otherworld is a world inhabited by supernatural creatures. Not as geographically solid as the human world, its regions are flexible and fluid and sometimes the links between them can be terminated in the face of outside threats. This became common in the years just before the Seelies took over, when border control measures attempting to keep the Seelies out of certain regions, the Otherworld growing more segregated in its protectionism. The Seelies were strong and talented enough to overcome the measures, and they now control, for the most part, the geography of the Otherworld.

Faeries, gnomes, ogres, and goblins all used to live exclusively in the Otherworld. Eventually, a special group of faeries (called “travelers”) realized that they could jump from the Otherworld into a totally different world, inhabited entirely by another species with considerably shorter lifespans and very different types of talents as well as very different types of vulnerabilities. Up until the time when the worlds began to cross over, there had been no need to name either world. Once travel between the two worlds became increasingly popular, both supernatural creatures and humans alike began referring to the human world as the Thisworld and the supernatural world as the Otherworld. (The supernatural beings liked being the “others.” They had always been used to finding value in “otherness,” in a way humans weren’t used to.)

This all happened millennia ago. Or just the other day. It depends on what kind of time you keep.

Once upon a time, the Otherworld and the Thisworld got along very well. Goblins migrated to the Thisworld fairly early on, drawn by the vast jewelry reserves. Faeries also flitted over frequently, growing increasingly more cavalier about being seen (this coincided with the historical frequency of faerie sightings, which died down as Otherworld-Thisworld relations deteriorated). Gnomes and ogres also traveled over, but they were naturally more averse to being seen and tried to blend in undetected. In the meantime, schools of sorcery started up in the Thisworld, training the most talented humans to interact on a supernatural level. They serve, primarily, as diplomatic posts, encouraging their students to “study abroad” in the Otherworld for a little while.

Faeries, much like wizards and witches, tend to carry particular talents through their genetic lines. The Seelies are nothing but genetically honed super-faeries, in effect, who happen to be unusually strong in naming power. Travelers are faeries who are especially good at the art of travel: they are never lost, possessing unerring senses of direction; they can get into and out of almost any room; and they have the unique ability to “jump” between physical spaces and between worlds, switching locations in the blink of an eye. Doors cannot be locked against them, and they can call for trains at will. Human folklore calls them “will o’ the wisps,” which humans understood to be luring them to their deaths. In reality, travelers are generally caught up in their own activities and seldom notice if they catch a human eye.

As the Seelies began to consolidate power, traveling became more valuable and, conversely, more dangerous to them. Travelers could spread word, quickly and easily, organizing rebellion and keeping others apprised of the Seelies’ movement. As a result, the Seelies began to hunt travelers in earnest. First they forbade the continuation of the line, and then, eventually, they imprisoned or named every traveler they could find. They left just one, for their own use, because the power of the travelers was too intense to eliminate altogether.

The immense talent of the travelers is balanced by immense weaknesses, which was why they never rose to the power of the Seelies. A traveler’s power can be disabled by the simple touch of a goblin, making them sworn enemies. Moreover, travelers are severely allergic to water, which dampens their abilities and can also weaken them to a point near death if they are kept too wet for too long. Finally, while travelers cannot be locked out of a room, they can be locked into one. The enchantment is a tricky one and requires much power but can be performed.

While traveling comes naturally to travelers, it is nevertheless exhausting, and they will often need rest after too much of it at once, especially if water is involved at any point. Some places are easier to travel to than others, and in times of great distress travelers will frequently focus on those. A traveler’s homeworld is always the simplest for him or her to return to. Cottingley is the easiest place for them to reach in the Thisworld. Even when the worlds were sealed into separation, the membrane between them has always been thinnest at Cottingley, making it the most ideal place to bridge the two. (Iceland is also heavy in faerie lore and also an easy place for a traveler to get to.)

I found this pic on Pinterest and I just absolutely adore it.. it’s so me 🙂

To acquire the habit of reading is to construct for yourself a refuge from almost all the miseries of life. 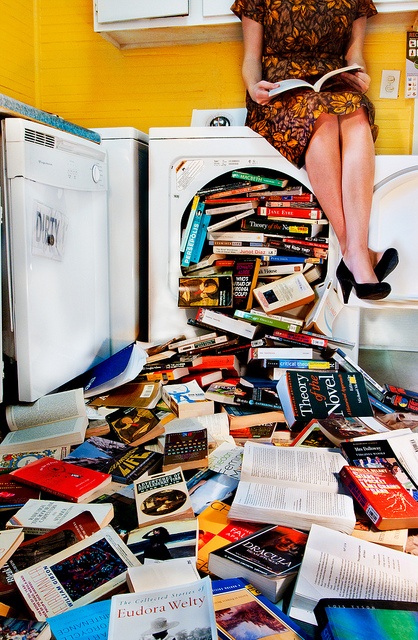 If only doing laundry was really this good! 😉